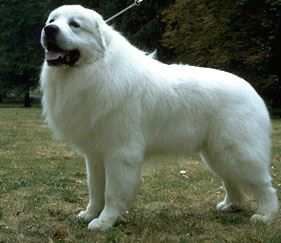 AKC Gazette breed column, Great Pyrenees: While other Pyrenees people may have a different list than mine of common myths about our breed, I believe that most of us have heard all of the following things said. So here is my list of the top five untrue things about Great Pyrenees that are commonly heard.

Myth #1: “They are so big!” I know they look big. And the breed’s name in the U.S. is Great Pyrenees. In Europe, however, they are actually called Pyrenean Mountain Dogs, and the breed’s AKC standard says they should be a dog of “medium substance.” In general, even large Great Pyrenees weigh about 100 pounds. This is a lot smaller than the Newfoundland or the Saint Bernard, with whom they are often compared. The impression of very large size is in part an optical illusion. They are white, and they have a lot of hair … a lot of hair.

Here is a true story: My friend had a beautiful, top-winning Pyrenees bitch whom she bred. Just after a Pyr bitch has her pups, she typically sheds out almost her whole coat so that the massive undercoat is totally gone. This beautiful girl also lost some weight feeding and caring for her puppies. In other words, she didn’t look too impressively large as she lay in her whelping box with her growing brood. When a potential buyer came to see the puppies with the thought of getting a pet, she saw the framed picture on the wall of the mom’s biggest show win. What a beautiful dog she was! However, the potential buyer was not impressed and said, “What are you trying to pull? You don’t expect me to believe this is the same dog, do you?” Well, yes. It was the same dog—just minus most of the hair.

Myth #2: “They must eat a lot.” This is actually related to the first myth. If they are so big, they must require a lot of food. Actually, Pyrenees tend to have a relatively slow metabolism, which means they eat less than expected for their size. Pyr owners must be careful not to overfeed or overmedicate their dogs, which can be easy to do.

Myth #3: “How can they live through a hot summer with all that hair? You should shave it off.” No, please don’t. The Pyr has a double coat. There is an insulating undercoat of fluff, with harsh guard hairs on the outside. In warm weather the undercoat is shed, leaving the protective outer coat. This coat is at least mostly white and reflects the sun. It traps a layer of air that is not a good conductor of heat to protect the dog underneath. In the winter, the dogs who come from the colder climates do have a beauty advantage in the show ring, as they grow their massive undercoats to keep them warm, but the dogs from the warmer climes are just as comfortable with their smaller coats. 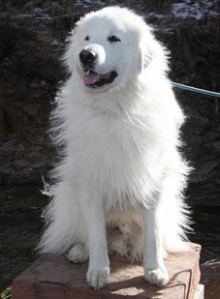 Myth #4: “They are just gentle giants.” Actually, the Pyrenees has been used for centuries to guard sheep. They are perfectly capable of fighting off predators, and years ago the breed was known for its protectiveness rather than its gentleness. Breeders have worked for the past 50 years to breed our dogs so that they are fearless and tame. If you talk to people knowledgeable about the breed from many generations ago, they will tell you that having a stable temperament was the highest priority for selecting breeding stock, and the effort paid off. Today’s Pyrenees should be a good housedog who should never be a danger to people.

Myth #5: “They need a lot of space to run.” Maybe not a lot of space. They are not a good choice for an apartment (and they are not a breed for everyone), but most Pyrenees are very happy lying around most of the time, being petted and being watchful just in case some other animal wants to invade their home. They are not a quiet breed, since they will loudly announce everyone who comes anywhere near your house or yard. This is where they still are our protective guardians. —Gail Knapp, Ph.D., J.D.