Home › AKC Gazette › “Courage, Dignity, and Self-esteem” — The Essence of the Pekingese

“Courage, Dignity, and Self-esteem” — The Essence of the Pekingese 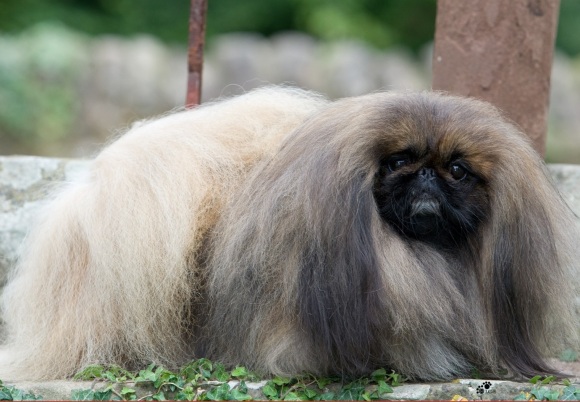 AKC Gazette breed column, Pekingese—“In evaluating a Pekingese, one must keep in mind that he is a toy dog of great substance and character for his small size.”

The Pekingese is one of the oldest recognized toy breeds, and a Pekingese should depict the breed’s Chinese origin and “lion dog” image.

The breed’s standard is very well written and clearly explains the correct type. Following is a guide to evaluating the breed in the show ring, with quotes from the standard appearing in italic font.

When the Pekingese enter the ring, the first thing the judge looks at is the overall balance and outline of every dog. The Pekingese is a well-balanced compact dog of Chinese origin with a heavy front and lighter hindquarters. Its temperament is one of directness, independence, and individuality. Its image is lionlike, implying courage, dignity, and self-esteem rather than daintiness or delicacy.

First of all the judge will consider the profile of the dog, the body shape, and the overall movement. Overall balance is of utmost importance. The head is large in proportion to the body. The Pekingese is slightly longer than tall when measured from the forechest to the buttocks. The overall outline is an approximate ratio of 3 high to 5 long.

The large head in proportion to the body is essential to breed type. The head should be massive, broad, with a flat topskull combined with wide-set, large, dark eyes and a shallow, rectangular, envelope-shaped head. (The type of “envelope shape” required here is that of a standard business-size envelope—not a square, birthday-card-type envelope.) 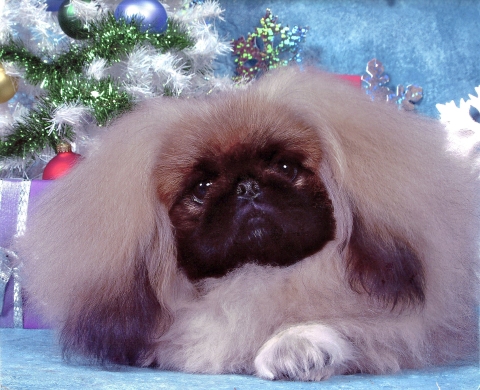 The judge should be able to see a line drawn horizontally over the top of the broad, short black nose that intersects slightly above the center of the eyes. The wrinkle separates the upper and lower areas of the face and frames the nose. The ears are set on the front corners with long, heavy fringing that frames the face. The muzzle and the mouth should be broad with an undershot lower jaw. Since dentition is not described in the standard, it is not necessary to open the mouth of a Pekingese. Pekingese are not trained for nor used to having their mouth pried open.

The judge should then move their hands down the short and thick neck and feel the well laid back shoulders and tight elbows as well as the short, heavy-boned forelegs that are moderately bowed between the pastern and elbow. This is accompanied by a broad chest with well-sprung ribs slung between the forelegs.

Moving around to the side of the table, the judge will examine the body and topline and determine that the topline is straight and level and with both hands will feel the pear shape and lighter loin with lighter boned hindquarters and moderate angulation.

The tail should be high-set with long, profuse fringing. The rear legs are reasonably close and parallel, with feet pointing straight ahead. Because the Pekingese has a long, coarse-textured, straight, stand-off outer coat, with thick, soft undercoat, it is necessary to hand-examine beneath the coat to determine body shape.

Because the Pekingese when lifted is surprisingly heavy for its size, it is necessary to determine this by properly lifting the dog. Some judges and exhibitors think the dog should be lifted because of the weight disqualification over 14 pounds. The reason a Pekingese is lifted is to determine that he is compact and surprisingly heavy for its size, with the majority of the weight in front. Gently lifting the dog a couple inches off the table will confirm this. If the judge suspects the dog is over 14 pounds, the scales will be called.

Correct movement on the Pekingese is only possible when the body is correct. The characteristic Pekingese roll must be smooth and effortless and is created by the correct body shape, along with the bow of the forelegs.

Rose Marie Katz, one of the prominent American breeder-exhibitors of Pekingese in the 1950s and ’60s, said:

“The Pekingese dog should be judged as a whole. He must present a picture of balance and type. He must be evaluated for his good points rather than torn apart for his faults. In evaluating a Pekingese, one must keep in mind that he is a toy dog of great substance and character for his small size.”

Further information about Pekingese can be found here and here and on the website of the breed’s national parent club, The Pekingese Club of America.