Posted on October 20, 2014 by americankennelclub — 2 Comments 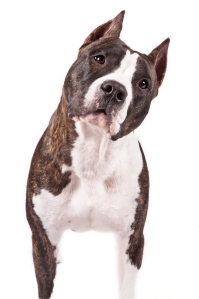 In the next few weeks,  residents of Aurora, Colorado, will be receiving mail-in ballots. Question 2D on the ballot asks, “Shall the people of Aurora adopt an ordinance allowing pit bulls back into their city?”

A vote of “YES” provides the opportunity for Aurora dog lovers and residents to fight discrimination restore the rights of dog owners in the city and protect the lives of dogs that are determined to be “pit bulls”.

Currently, the city of Aurora  is one of a declining number of communities  across the country that  ban ownership  of “pit bulls”, which  city code defines as American Staffordshire Terriers, Staffordshire Bull Terriers, American pit bull terriers, or any dog that “substantially conforms to the standards for these breeds” (in other words, dogs that look like they may be one of these breeds could be banned).   Dogs deemed to be on the restricted breed list are assumed to be dangerous and can be impounded and euthanized unless the dog can be transferred to someone outside city limits.

Breed-specific dangerous dog laws (BSL) like the one in Aurora are tantamount to racial profiling for dogs. They unfairly penalize responsible dog owners and actually exacerbate community dog issues because they do not hold all dog owners equally accountable for the actions of their dogs.

The American Kennel Club opposes breed-specific laws  and supports a “YES” vote to remove the ban and allow dog owners to once again responsibly own the breed of their choice – regardless of its appearance. Other national organizations such as American Veterinary Medical Association, the National Animal Control Association, the American Bar Association, and a host of other respected national organizations also oppose BSL and recognize the issues, inequities and fallacies inherent with such laws.

AKC’s Government Relations Department  is working AKC’s Colorado Federation of Dog Clubs and area dog clubs to educate residents about  dangerous dog issues, responsible dog ownership, and how breed bans are not only ineffective, but can actually harm the communities they are designed to protect.

“It’s time to stop the killing of innocent dogs based only upon their appearance,” says Linda Hart of the Colorado Federation of Dog Clubs.

“Animal Control officers will admit privately that they do not believe the ban in Aurora makes the citizens safer and it takes time away from their ability to do bite prevention in the community. Aurora would be better served with an updated and more effective dangerous dog law that makes the owner of any breed of dog that bites responsible. To effectively reduce dog bites it’s necessary to break the cycle of repeat offenders who may allow a dog to be destroyed because of a bite situation, but almost immediately go out and get another puppy which they raise in the same environment and create another dangerous dog.”

Specific concerns with the Aurora law include the following:

For more resources and information about BSL, view AKC’s   Issue Analysis “Why Breed-Specific Legislation Doesn’t Work”, view AKC’s award winning dog safety video for Children — The Dog Whisperer, and a variety of other resources on the topic.

The AKC lauds Aurora City leaders for bringing this issue to a vote, and urges citizens  to vote YES to end discrimination based on appearance and to support responsible dog ownership, regardless of breed.